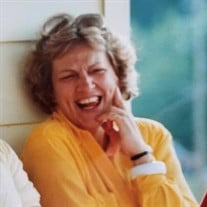 Beloved daughter, wife, mother, grandmother, aunt, sister and friend to all, passed on late, good Friday April 10, 2020. Sara is now having a joyous reunion with all her family that have passed on. Sara was the daughter of Bud Otis and Alma... View Obituary & Service Information

The family of Sara Ellen Bell Daniels created this Life Tributes page to make it easy to share your memories.

Send flowers to the Daniels family.