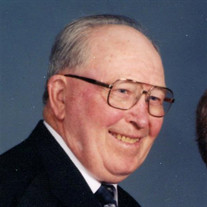 January 4, 2017, Heaven welcomed home a loving husband, terrific dad, dedicated grandpa, loving son and brother, and wonderful neighbor. Scott Elmer Jackson was born in College Ward, Utah, Friday June 30, 1920, the fourth child of Elmer L. and Sarah Jane Scott Jackson.He learned how to work on the family farm and enjoyed fun loving adventures with his brothers and sisters. In 1941, Scott registered at Utah State University and played football for the Aggies for a couple of months before being drafted into the U.S. Army to serve four years on various islands of the South Pacific during WWII. Scott was a "true blue Aggie" through and through. He loved to attend or listen to both USU football and basketball games. He was also a devoted JAZZ fan and watched the team on television as often as he could. In the fall of 1945 after returning from military service, he and a friend noticed a couple of young women working in a downtown Logan store and asked them out. Scott and his friend flipped a coin to see which guy went with which gal. With that coin toss, Scott won the prize of his life. Six months later he married that prized young woman, LuDean Burris. After marrying LuDean, Scott trained as a mechanic with Ace Raymond in Logan and later joined Bullen's Farm Implement where he worked as shop foreman. He fixed all manner of farm machinery all summer long and got to know farmers from Cache Valley, Wyoming, Idaho, and parts beyond. He spent many hours tending the fields of the LDS Church welfare farms in Cache Valley. After more than 25 years at Bullen's he retired and took a job as the Building Engineer for the Logan 3rd and 17th LDS Ward building. He took pride in seeing that the church was ready for anything -- from basketball games in the gym to church services on Sunday. Scott was a faithful member of the Church of Jesus Christ of Latter-Day Saints. He served as a Sunday School President, Scoutmaster, Building Coordinator, Counselor in the Bishopric, Sunshine Terrace Branch President, Logan Temple worker, and always a Home Teacher. Scott was a master mechanic and repairman always tinkering on someone's machinery or cars. In his spare time he liked fixing things at home, mowing the lawn, taking care of the roses and shoveling sidewalks for neighbors during the winter. His favorite pastime was snowmobiling in the winter. He loved spending time in the snow laden mountains with all of his snowmobile buddies. Scott and LuDean raised five daughters: Meriam (Alan) Nielsen; Sherrie (Paul) McKenney; Dee Ann (Daniel) Davidson; Laurie Jackson; Gay Jackson. His posterity includes eight grandchildren and their spouses and 24 great grandchildren. He was always "Grandpa Great" or "Grandpa J." Grands and greats would always want to sit on his lap or receive the hugs he freely gave. He delighted in holding each new baby that came into the family and always provided continued support to each and every family member. Scott was preceded in death by his wife, LuDean Burris Jackson, granddaughter Marie McKenney, and his seven brothers and sisters: David Jackson, Ileen Olsen, Glen Jackson, Harold Jackson, Amelia Buttars, Carvel Jackson and RheaBell Pitcher. Scott's family would like to thank Anna, Kim, and Pam from Intermountain Home Health Care and Hospice. These women treated Dad with respect and dignity during his short illness. Funeral services will be held at Nelson Funeral Home, 162 East 400 North, Logan Utah on Wednesday, January 11th at noon. Closed casket visitation will be held Tuesday evening, January 10th from 6:00 to 8:00 pm and prior to services on Wednesday the 11th from 10:30 to 11:30 am. Interment with military rites will be in the Logan City Cemetery immediately following the funeral. For those wishing to make charitable contributions In memory of Scott's willingness to help others, please contribute to the Juvenile Diabetes Research Foundation (JDRF) or the LDS Church Humanitarian Fund. Condolences and memories can be shared online at www.nelsonfuneralhome.com.

The family of Scott Elmer Jackson created this Life Tributes page to make it easy to share your memories.

Send flowers to the Jackson family.