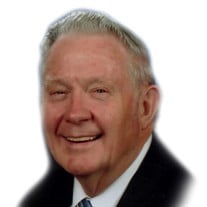 Sheldon Edward Moore, age 81 completed his earthly mission on Thursday, June 29, 2017 and was welcomed into the spirit world by other departed family members and friends. Sheldon was born in Coalville, Utah on March 30, 1936. He was the oldest of five children born to Edward Victor Moore and Ellen Juanita Staples. He was raised on a farm in Upton, Utah where he learned the value of hard work and how to use tools to make repairs and build things. After graduating from North Summit High School in 1954, he headed to Logan, Utah to further his education at Utah State University. He met the love of his life, Sharmeen Bell, while acting as a tour guide through the USU Automotive Technology building. They sealed their love for time and all eternity in the Logan LDS Temple on June 12, 1957 and recently celebrated their 60th wedding anniversary. Sheldon graduated from USU in 1959 with a degree in Industrial Technology. He worked at Firestones before being hired at Thiokol as a lab technician and continued to work there for nearly forty years until he retired in 1999 as the assistant to the manager of the Research and Development Laboratories. As a member of the LDS faith, he served in many different auxiliaries, presidencies, and bishoprics. On April 18, 1999 he was called to serve as the first bishop of the newly reorganized Logan 29th Ward. He also served as a faithful home teacher. Dad loved people and did his best to serve those around him. His greatest treasure was his family and he enjoyed spending time with them and taking their pictures. Many lives have been blessed because he was willing to share his time, skills, and the produce from his large garden. Sheldon is survived by his eternal companion, Sharmeen, and their three children and spouses, Kevin Sheldon Moore (Nedra), Lori Larson (Greg), and Tamara Peterson (Farrell); seven grandchildren, and fifteen great grandchildren. He is also survived by his three sisters, Arlene O’Driscoll (Earl), Ileane Taylor (Randy), Doris Prettyman (Ernie) and one brother, Arvin. He was preceded in death by both his parents. The family would like to express their gratitude to Dr. Russell N. Hirst Jr., Diana, and Kristi, Stacey and her caring CNA’s, Xochithl, Darrell, Tammy, and the compassionate staff who are angels at Autumn Care, as well as Dr. Vera Carlson, Vicki, Debbie, Lindsey, and Danny, from Rocky Mountain Hospice for their personal, caring devotion to our Dad during his declining years. We also wish to express special thanks to Dr. Samuel Peery, Ed Winger, and all those who have touched our lives through their loving service given to our father and family. The funeral service and viewings will be held at the Nelson Funeral Home at 162 East 400 North, Logan, Utah. There will be a viewing on Wednesday, July 5, 2017 from 6-8 p.m., and again on Thursday, July 6, 2017 from 10:30-11:30 a.m. prior to the funeral service at 12 noon. Interment will be in the Logan City Cemetery. We will have a place at the funeral home where you can write down “Moore Memories” of Sheldon.

Sheldon Edward Moore, age 81 completed his earthly mission on Thursday, June 29, 2017 and was welcomed into the spirit world by other departed family members and friends. Sheldon was born in Coalville, Utah on March 30, 1936. He was the oldest... View Obituary & Service Information

The family of Sheldon Edward Moore created this Life Tributes page to make it easy to share your memories.

Send flowers to the Moore family.