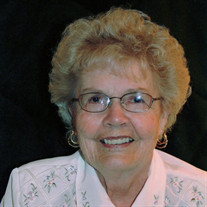 Shirley Kae Brough Weston, our beloved mother, grandmother and sister completed her mortal journey on Tuesday, 27 June 2017, at Legacy House in Logan, Utah. Kae was born October 10, 1929, to Richard Muir Brough and Gwendolyn Kearl Brough. Her father passed away when she was 11 years old. As the oldest child she became her mother’s right hand in looking after her younger brothers and doing household chores because her mother had to go to work to provide for the family. Kae loved and cared for her brothers with great passion. They became a very close family as they worked together for the necessities of life. Kae met Albert Ivan Weston from Laketown on a blind date. Ivan soon swept Kae off her feet, and on November 18, 1947, they were married in the Logan Utah Temple for time and eternity. Together she and Ivan raised 5 daughters and 2 sons teaching them through their example of hard work, service to God, and community. Kae served in all of the church women’s auxiliaries as a teacher and leader. You could always find Kae sewing clothes for her daughters, gardening, canning, painting crafts, decorating her home and yard, or whipping up a batch of soft, warm applesauce-chocolate chip cookies; just one of her beloved recipes. For 26 years Kae served as the Laketown Postmaster. For many years the Post Office was connected to their home but eventually Ivan and Kae facilitated the building of the current Post Office on the west side of Laketown. After retirement, Ivan and Kae set out on another great adventure together as they served an LDS mission to Samoa for 18 months, 1991-1992. She and Ivan served as ordinance workers in the Logan Temple. It was apparent the Gospel and family were primary priorities of Ivan and Kae's lives. Family members all cherish memories of gatherings for birthdays, holidays, parades, Sundays and other special events celebrated at the Weston home. Numerous laughs and some tears were shared in their home, on their back porch, and in their meticulously kept yard and garden. As they aged, Ivan’s health declined. Kae took a very dedicated approach as a caregiver. She stayed near his side constantly until he passed away on August 25, 2008. Oh how she missed him, and desired to be with him! How sweet Kae’s reunion with Ivan must be, as well as that with her father and mother, stepfather Lawrence Chris Hanney, her brother Monte James Brough and countless others whom she loved and who preceded her in death. Kae is survived by her daughter, Sherilyn Rex (Steve) of Logan, her son, Albert Dixon Weston (RaNae) of Laketown, her daughters, Debbie Stringham (Dan) of Laketown, Annette Pugmire (Kelvin) of Laketown, Pauline Williamson (Michael) of Laketown, Patricia Argyle (Bart) of Randolph, and son, Richard James Weston (Lynn) of Mesa, Arizona. She has 29 grandchildren, and 67 great-grandchildren. She is also survived by her brothers Richard Lyle Brough (Lola), Max Paul Brough (Rosanna), and Lawrence Val Hanney (Virginia), and sisters-in-law Lanette Brough and Marie Humphrey. The family expresses gratitude to Kae’s countless friends and neighbors who have been so kind to her over the years; to the staffs at Legacy House and Hospice for their kind and loving care in her last years! Services for Kae will be Monday, July 3rd at noon in the Laketown Ward Chapel. A viewing will be held Sunday, July 2nd, 6:00—8:00 PM in the Laketown Chapel, and prior to the funeral on Monday, 10:00—11:30 AM. Burial will be in the Laketown Cemetery.

The family of Shirley Kae Brough Weston created this Life Tributes page to make it easy to share your memories.

Send flowers to the Weston family.