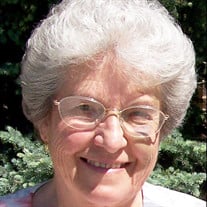 Shirley Larsen slipped from this life to the next in the early morning hours of Dec. 26. She was born Feb. 27, 1928 in Smithfield to William Ervin Coleman and Berneice Wilcox Coleman. She met her eternal companion, Garth Larsen, on a blind date in December 1945. They were married in the Salt Lake Temple Sept. 4, 1946 and were blessed with four children. Shirley and Garth started out in Logan then moved to Smithfield where Garth opened a TV sales and service shop. While raising their family, Shirley helped with the business by answering phones and assisting customers. They loved travelling and went to destinations all over the world. Shirley was very active in The Church of Jesus Christ of Latter-day Saints and served in numerous callings throughout her life, including a service mission with Garth at the Deseret Industries in Logan. She was also active in the PTA and the Smithfield Community Club where she made lifelong friendships. Shirley was very talented and could always be found at the sewing machine making clothes for her children and even her daughters’ wedding dresses. She also enjoyed crocheting and needlework as well as word puzzles. After Garth’s passing in 2012, her health began to fail and she moved from Smithfield into an assisted living center in Kaysville where she could be closer to her children. Her kind, quiet nature endeared her to the staff and other residents there. Shirley’s sweet smile will be missed. Shirley is survived by her four children, Lynn (Andrea) Larsen, Cindy (Mike) Budge, Pam (Leon) Soren and Becky (Jim/deceased) Ginos, 19 grandchildren and 45 greatgrandchildren. She is also survived by her sister Darlene Krambule, brother Gary Coleman and sister-in-laws, Carol Coleman, Nina Coleman and Ruth Larsen, brother-in-law Ken Larsen. She is preceded in death by her parents, her husband Garth, her sister Marilyn Eppich, her twin brother Sherwin, brother Delmar, her brother-in-laws Eslie Eppich and Paul Krambule, sister-in-law Lola Coleman and son-in-law Jim Ginos. A viewing will be held Saturday, Jan. 4, 2020 from 10:30 – 11:30 a.m. followed by a funeral at noon at Nelson Funeral Home, 162 E. 400 N., Logan, UT 84321. The family would like to thank the Apple Tree staff and Inspiration Home Health & Hospice for their kind and loving care during Shirley’s final days. Condolences may be sent to the family online at www.nelsonfuneralhome.com.

Shirley Larsen slipped from this life to the next in the early morning hours of Dec. 26. She was born Feb. 27, 1928 in Smithfield to William Ervin Coleman and Berneice Wilcox Coleman. She met her eternal companion, Garth Larsen, on a blind date... View Obituary & Service Information

The family of Shirley Coleman Larsen created this Life Tributes page to make it easy to share your memories.

Shirley Larsen slipped from this life to the next in the early...

Send flowers to the Larsen family.