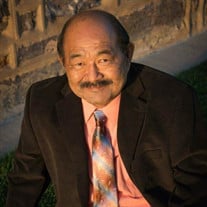 Stanley Floyd Kaneko, 65, of Hyde Park Ut passed away March 7, 2018 surrounded by loved ones at McKay Dee hospital. Born on Dec.10, 1952 to Floyd and Leona (Tanaka) Kaneko of Tremonton Ut, Stan loved his Denver Bronco games and his Utah Jazz games, other things that Stan loved to do with his time was bowling, fishing, camping and participating in city softball leagues. Most of all Stan’s number one love was his wife and is also survived by Julie Jo, married Sept. 9, 1979 later sealed for all time and eternity in the Logan LDS temple on June 10, 2016, Stan was also survived by his four kids Amy ( Daniel ) Lowe, Maryann ( Robert ) Christensen, Jody ( Becka Livingston) Kaneko, Danielle ( Marshall ) Donnell, 16 grandkids, his mother Leona, 3 sisters Nancy ( Mark ) Treasure, Barbara ( Randy ) Williams, Michelle ( Jeff ) Lathrom and his sister-in-law Robin Kaneko. Stan worked at Schreiber Foods for 8 years then in Feb. 1979 started to work as an X-ray Technician at ATK until he was forced into retirement by his illness. Stan was proceeded in death by Father, Brother, Mother and Father-in-law and Brother-in-law. There will be viewing held Sunday March 11th at Nelson Funeral Home from 6-8 pm. Funeral services will be held at the Hyde Park 9th Ward with a short viewing from 9:30-10:30am, Funeral Service at 11:00am, Internment will be at the Hyde Park Cemetery.

The family of Stanley Floyd Kaneko created this Life Tributes page to make it easy to share your memories.

Send flowers to the Kaneko family.