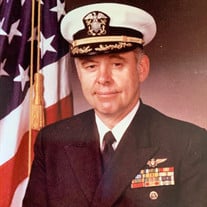 Tad Howard Bingham of Amalga passed away peacefully on Thursday, September 24, 2020 at the age of 86. Tad was born to Howard Rulon and Violet Woolf Bingham in Logan on January 23, 1934. Growing up in Amalga, Utah, Tad graduated from North Cache High School in 1952. After graduation he attended Utah State University and studied engineering. Deeply fascinated with airplanes as a young boy, he gave into the urge during his junior year at Utah State and joined the Naval Aviation Cadet Program. Tad was awarded Naval Aviator Wings of Gold upon completing jet flight training at Beeville, TX and commissioned an Ensign in the USN June 1957. Tad’s next orders were to a carrier fighter squadron, where he flew the Supersonic F-11 Tiger during two Western Pacific deployments onboard the USS Bon Homme Richard. By the end of the second cruise, he had qualified as a Double Centurion, with 200 carrier landings aboard the ship. This sea duty was followed by shore duty at NAS Moffett Field, CA as a maintenance test pilot, as well as department administrative duties. Another tour of sea duty followed at NAS Whidbey Island, WA flying the A-3 Sky Warrior with a heavy attack, all weather nuclear delivery mission. He made two carrier deployments during the Vietnam War, the first onboard the USS Kitty Hawk and then the USS Oriskany. With 10 years active Navy duty, he decided he would try something that would afford more time at home and hired on with Pan American Airlines based in San Francisco. He started as a navigator on the 707 and then co-pilot. With the introduction of the Boeing 747, he was there as a co-pilot and later out of Kennedy as Captain, having flown the 747 for 21 years. Tad had 26 amazing years flying Pan Am’s far flung world routes. Tad maintained his Navy affiliation through the Reserves during his airline career and had several major command opportunities. Twice as Commander, he commanded A-3 tactical electronic and aerial refueling squadrons. Upon promotion to Captain, he commanded a carrier battle group staff augment unit and then a NATO strategic direction center augment unit. Tad retired with 30 years commissioned service. Upon the death of Tad’s dad in 1973, he moved his family to Amalga, took over the farm, and commuted to his USNR and Pan Am duties. He married Lorena Miller in 1958 and they had six children. They later divorced and he married Janice H. Jenson in 1996. Tad had a passion for life and living his life to its fullest potential in the air and working on his many endless projects on the farm. Tad is preceded in death by his parents & his brother, Jay R. Bingham. Tad is survived by his wife, Janice his “Sweetheart” with whom he resided with in Amalga, Utah for 25 years. Tad is also survived by his six children from his first marriage, Jeff Bingham (Nancy), Alison Thomson (Mike), Brenda Bellamy (Chris), Andrea Bracken (Vincent), Russell Bingham (Marnie) and Greg Bingham (Jessica), and his five step-children, Bruce Wright, Tim Wright (Pam), Robert Wright (Nikki), Mary Smith (Scott), Jimmy Jenson. The family would like to thank all who have helped Tad over the past several years with his battle with cancer. Dr. Gray and especially Lynn Larson for all they did to keep the cancer at bay as long as possible. We want to extend a special thanks to Nancy, his home health care and hospice nurse along with the RN Carrie. We also want to thank the amazing care givers at Maple Springs who did so much for Tad over the past few months and a special thanks to Chani. Graveside services will be held Tuesday, October 6, 2020 at 11:00 a.m. in the Smithfield City Cemetery. A viewing will be held Monday evening, October 5, 2020 from 6 to 8 p.m. at Nelson Funeral Home, 85 South Main, Smithfield. You may join the graveside service on ZOOM at https://us02web.zoom.us/j/89161779134?pwd=VEkrVGlmMUpTK1hyTXNGZEJGSEcvdz09. Condolences may be sent to the family online at www.nelsonfuneralhome.com.

Tad Howard Bingham of Amalga passed away peacefully on Thursday, September 24, 2020 at the age of 86. Tad was born to Howard Rulon and Violet Woolf Bingham in Logan on January 23, 1934. Growing up in Amalga, Utah, Tad graduated from North... View Obituary & Service Information

The family of Tad Howard Bingham created this Life Tributes page to make it easy to share your memories.

Tad Howard Bingham of Amalga passed away peacefully on Thursday,...

Send flowers to the Bingham family.