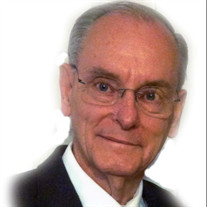 On July 13, 2019 Terrence Frank Glover passed peacefully through the veil at the age of 79 at Cache Valley Assisted Living and Memory Care in Providence, Utah. Terry is survived by his beloved wife Barbara of Logan, Utah, and their children and grandchildren; the families of Julie (Randy), Angela, Natalie (John), and Sherene (Wilson). Terry was born on June 12, 1940 at home in Farmington, Utah to Valence Clayton and Hattie Virginia Solomon Glover. He is the youngest of 4 children and was raised on the family farm alongside his older siblings, David, Gail, and Kay. Terry had very fond memories of growing up on the farm and often entertained his children and grandchildren with funny stories about his family’s adventures there in Farmington. Terry graduated from Bountiful High School, and attended Utah State University before serving a full time mission for the Church of Jesus Christ of Latter Day Saints in the Eastern States Mission. After his mission, Terry returned to USU, where he received both his Bachelor’s and Master’s Degrees. It was there he met and fell in love with his sweetheart, Barbara. They were married in the Logan Utah Temple on March 18, 1966. Together, they raised 4 daughters. They began their life together in Lafayette, Indiana while Terry completed his Ph.D. in Economics at Purdue University. Their first two daughters, Julie and Angela, were born there in Indiana. Later they moved to Columbus, Ohio to take a job at Ohio State University, where their third daughter, Natalie, was welcomed to the family. When the opportunity came to move back to Utah, they packed up the little ones and moved to Logan, Utah where their youngest daughter, Sherene, was born. Their four daughters have kept them busy ever since, and Terry loved being with his kids and grandkids. Terry spent his career as a professor of Economics for Utah State University where he taught and did research and consulting until his retirement in 2015. He always took a personal interest in his students’ welfare and had a collection of gifts from all over the world expressing their appreciation for his mentoring. Terry has always been an active member of the Church of Jesus Christ of Latter Day Saints, serving in many callings, twice as a Bishop. He and Barbara most recently enjoyed serving in the Primary together and loved planning lessons and activities for the young children in their class. The two of them enjoyed family outings and reunions and attending the opera, musicals and plays together. He loved to give anonymous service and was always helping neighbors and friends. He worked tirelessly to provide for his family and enjoyed reading religious books in his spare time. His sense of humor never left him, and he was well known as a “jokester” to family, friends and colleagues. His grandkids adored him and fondly remember Grandpa’s inability to finish telling them a joke because he was already laughing too hard to get to the punchline! The family would like to thank all of Dad’s caregivers at Cache Valley Assisted Living & Memory Care, where he was tenderly cared for during his last months. We would also like to extend our appreciation to CNS Community Hospice, who provided Dad’s wonderful personal nurse and aides, with whom we have a special bond. Friends may visit the family at a closed casket viewing Saturday July 20th from 10am to 11:00am at the Church located at 1260 N 1600 E in Logan, Utah. Funeral services will follow at 11:30am. Internment, Logan City Cemetery. In Lieu of flowers, please consider a donation to the Humanitarian Aid Fund of the Church of Jesus Christ of Latter Day Saints at give.lds.org/humanitarian

On July 13, 2019 Terrence Frank Glover passed peacefully through the veil at the age of 79 at Cache Valley Assisted Living and Memory Care in Providence, Utah. Terry is survived by his beloved wife Barbara of Logan, Utah, and their children... View Obituary & Service Information

The family of Terry Glover created this Life Tributes page to make it easy to share your memories.

Send flowers to the Glover family.