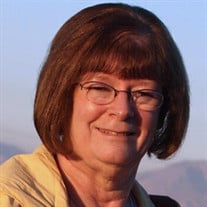 Terry Lynn (Anderson) West was born March 2, 1949, in Billings, Montana to William Carson and Helen Ruth (Webb) Anderson. She is the third of four children born to William and Ruth. Her early years were spent in Billings, Montana, and the Denver, Colorado area. Terry attended, and graduated from, Wheat Ridge High School, Wheat Ridge, Colorado. During this time she came to meet her future forever sweetheart, Randy West. Terry and Randy were married on December 21, 1968 and were sealed for time and eternity in the Salt Lake City temple on December 27, 1968. They are the parents of four children, Lynn, Timothy, Shauna and Kimberly. Terry lived in many places throughout her married life, beginning in Logan, Utah. The family later moved to two different homes in Sandy, Utah before a move to Sun Prairie, Wisconsin, where she spent eight amazing years. A job transfer in 1988 took the family back to Sandy. A few years later, in 1994, Terry, Randy, Shauna and Kim began another adventure that took them to Belle Meade, New Jersey. A return to Utah soon came, taking them this time to Draper, reuniting Terry & Randy with all of their children. Their final move took them back to where it all began, in beautiful Cache County, this time to Smithfield. Each of these moves brought opportunities for personal growth and new, wonderful, life-long friends. As a youth Terry enjoyed sports, excelling in the long and high jumps. Later in life she enjoyed playing softball and volleyball. She loved horses, often riding them bareback. She was a talented artist, no matter the medium. She enjoyed tole painting, painting with acrylics, pencil drawings, crewel work, and intricate counted cross stich. The walls of her home, and those of her children, are adorned with many of these works of art and are cherished treasures to her family. Terry also enjoyed collecting porcelain dolls and figurines of all types. She provided a cultural paradise for her family and friends within her home. Other hobbies included gardening, watching old classic movies, and boating. She loved the beauty of the fall season and the beginning of “sweater" weather. She loved sweaters! Until her illness made it impossible, she enjoyed decorating for every holiday, inside and outside the house. Christmas was her favorite holiday of all. She was diagnosed with liver disease (NASH) in 2015. The disease progressed quickly, eventually destroying her liver and kidneys. Through the miracle of organ donation, and doctors who are able to perform complex transplant surgeries, we were able to spend more time with her than we would have otherwise. We are eternally grateful for the anonymous donor, and their family, that granted us additional time with her. The complications from the disease are too numerous to name. She endured her health challenges with amazing courage and grace. Even though her spirit remained strong as always, the complications were more than her mortal body was designed to withstand. She passed away peacefully, surrounded by family, in the morning hours of September 3rd, 2021. Terry was a life-long member of The Church of Jesus Christ of Latter-day Saints. She served in many callings in the Relief Society and Primary organizations. She also served, alongside her husband, the Ward and Stake Young Single Adults during her time in New Jersey. She particularly loved serving the children during her time spent in the Primary organization. Our family wishes to express our heartfelt thanks to all the doctors, nurses and countless other healthcare professionals that have cared for Terry over the years. We express special thanks to Dr. Richard Gilroy, Dr. Steven Salisbury, the kidney and liver transplant teams at IMC Salt Lake City, and the hospice care team at Logan Regional Medical Center. Terry is survived by Randy, her sweetheart of 55+ years; her beloved mother-in-law, Louise West; brother Carson Eugene (Deann) Anderson, sister Sharron (Ed) McNally, and brother Scott (EJ) Anderson; sister-in- law Laura (Herb) Northcott, brother-in-law Jeff (Kitt) West; her four children Lynn (April) West, Timothy (Shelley) West, Shauna (Ryan) Carlson, & Kim (Greg) Wright; and 18 wonderful grandchildren, which she adored with all of her heart. Terry was preceded in death by her parents, William C. and Helen Ruth Anderson, her father-in-law, Arnold E. West, and her nephew Cody West. To all that knew her, she will forever be remembered as a positive, tender-hearted, kind, loving, compassionate woman who knew how to make you feel special. To her children she was a Christ-like example of love and patience, at all times. More than anything, being with her family was the highlight of her life. She always wanted to be a mother and was the best mother we could have asked for. A viewing will be held in her honor on Friday, September 10, 2021, at the Smithfield 20th Ward chapel, 600 East 120 South, Smithfield, Utah, from 11:00 am – 12:30 pm. Funeral services will immediately follow, beginning at 1:00 pm. Interment will be at the Smithfield City cemetery. Services will be privately broadcast via Zoom. For a link to the broadcast please contact a member of the immediate family.

The family of Terry Lynn (Anderson) West created this Life Tributes page to make it easy to share your memories.

Send flowers to the West family.