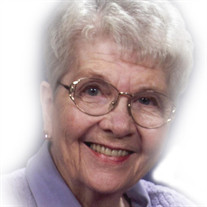 Theresa ("Terry") Nixon Engle died Sunday on Mother's Day May 10, 2015 at Logan Regional Hospital of natural causes. She was born on May 27, 1927 in Superior, Wisconsin to David Edward Nixon and Loretta Zinkan Nixon. She attended St. John's Catholic School and St. Joseph Academy. Terry married Roland ("Ron") Engle on August 12, 1950 at St. Josephs Catholic Church in Hawthorne, CA. They have celebrated 64 years of marriage. She was a member of St. Thomas Aquinas Church, Hyde Park, UT. She enjoyed many years of organizing and chairmaning numerous fund raising events to benefit the church’s charities as well as local philanthropies. She lived in Williamsville, NY for eight years and was employed as a personnel specialist at JCP retail chain. She and Ron retired to Logan in May of 1986. She spent her retirement years as a regular and dependable volunteer at "Somebodys Attic" a non-profit organization benefiting CAPSA. Terry is survived by her husband Roland of Logan, two daughters and their spouses. Susan and spouse Alan Moser of Logan, UT; Linda and spouse Harry Van lerssel (deceased), Jamaica, West Indies, two sons Michael and spouse Colleen of Logan, UT, son Mark of Hyrum, UT. A sister and brother in law Mary and Art Mendoza, Millbrae, CA. Six grandsons and 7 great grandchildren. She was preceded in death by her son Jim, mother Loretta, father David, sister Rose Marie, brother John, infant twins, and a sister. A visitation with family and friends will take place at 3:30 p.m. before a funeral mass which will be celebrated at 4:00 p.m. on Friday, May 15, 2015 at St. Thomas Aquinas Parish in Hyde Park. In lieu of flowers the family would gratefully request donations be made in her name to St. Thomas Aquinas building fund. Condolences and memories may be shared with the family online at www.nelsonfuneralhome.com

The family of Theresa Ann Engle created this Life Tributes page to make it easy to share your memories.

Send flowers to the Engle family.