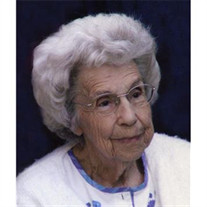 Thora Amanda Brown Littledike, 98, passed away peacefully at her home in Lewiston, Utah on June 19, 2009 surrounded by her family. She was born to Charles Alexander Brown and Pearl Butler Brown, the sixth of their ten children, on June 5, 1911, in Trenton, Utah. Thora grew up in Trenton where she learned the value of hard work and compassionate service from her parents. As a young child she developed a deep love for music and learned to play the piano by practicing the music lessons that were assigned to her older sister. Her natural talent allowed her to play any music she heard by ear. At the age of 12, Thora played the background music for the weekly silent movies that were shown in the church recreation hall. As a teenager, Thora was the church pianist and also played for school dances. She taught piano lessons for the next 30 years to many students through out Cache Valley and in the area of Ogden, Utah. While attending her first 2 years of high school in Pocatello, Idaho, Thora sang in a double trio that performed statewide. She finished high school at North Cache High School and was a lead singer in high school plays. Thora was valedictorian of her graduating class at North Cache High School in 1930. Thora met her future husband, Ernest Clyde Littledike, at a high school dance. They were married on Jan 10, 1931, in Pocatello, Idaho and sealed for time and eternity on May 29, 1953 in the Logan LDS temple. They had two sons, Travis and Tracy, and a daughter, Jaclyn. The family resided in Cache Valley and in the Ogden area until the 1950's, when the family bought a farm in Lewiston, Utah. Clyde and Thora had been happily married for 67 years at the time of Clyde's death in 1998. During her adult life, Thora served faithfully in numerous LDS church callings, which included choir director and ward and stake chorister in many locations in which she lived. Thora served in the MIA for 8 years, in the Primary organization for 36 years, and on many stake and ward boards. For eight years Thora conducted a 150-member youth choir, which performed in the Salt Lake City Tabernacle and at the dedication of the "This is the Place" monument. She composed a musical number, which the Stake Relief Society Women's Chorus presented at stake conference. When asked to give a talk in Church, Thora would usually give it as a heart-felt musical number. She regularly played the piano to the delight of her husband and family. Thora was able to play for several hours a day well into her nineties. As her children became older, Thora became the first full-time woman realtor in Cache Valley. She was straightforward and thoroughly honest in her dealings. Many of her clients bought several homes from her during the course of her career. The Logan Board of Realtors recognized Thora for 41 years of service. After retiring from her real estate career in her late seventies, Thora learned to paint with oils and became a very proficient painter during the next 8 years. Her treasured paintings hang in the homes of her family members. Thora was a hard working, energetic, brilliant, and generous woman, who was full of compassion for all people. She knew right from wrong and had little patience for those practicing otherwise. Thora is survived by her three children, Dr. Ernest Travis Carolyn Littledike of West Jordan, UT, Lila Jaclyn Littledike of Lewiston, UT, and Tracy Clyde Loreen Littledike of Kaysville, UT, by her seven grandchildren, twenty great-grandchildren, four great-great-grandchildren and her brother, D. Duane Brown of Ogden, UT. She was preceded in death by her husband, Ernest Clyde Littledike, her parents, Charles Alexander Brown and Pearl Butler Brown, her brothers, Theron, Lael, Verrall, Narland, and Valden Brown, her sisters, Idalia Huff, Opal Cahoon Wood, Vadis Hillyard, and her great-grand child, Dallin Hawkins. Funeral services will be held at the Lewiston Third Ward Chapel, 16 South Main, Lewiston, Utah, on Tuesday, June 23 from 11:00 a.m. to 12:00 noon. Friends may call on Monday, June 22 from 6:00 to 8:00 p.m. at the Nelson Funeral Home at 85 South Main in Smithfield, Utah, and on Tuesday, June 23, from 9:30 to 10:30 a.m. at the Lewiston Third Ward Chapel prior to the funeral. Burial will be at the Smithfield City Cemetery immediately following the funeral. Condolences may be extended to the family online at www.nelsonfuneralhome.com The family expresses their heartfelt gratitude to Leisa Wallace, CNA, for her exceptional daily care of our mother during her final months of life. Our deepest thanks are given to Thora's music therapist, Leitha Mark, to her CNA's, Lara, Jenney, Tiffany, Britnee, and Kiley, and her R.N., Shaleace Summers, all of Alpine Hospice, for their consistently excellent care of our mother.

Thora Amanda Brown Littledike, 98, passed away peacefully at her home in Lewiston, Utah on June 19, 2009 surrounded by her family. She was born to Charles Alexander Brown and Pearl Butler Brown, the sixth of their ten children, on June 5, 1911,... View Obituary & Service Information

The family of Thora Amanda Brown Littledike created this Life Tributes page to make it easy to share your memories.

Send flowers to the Littledike family.