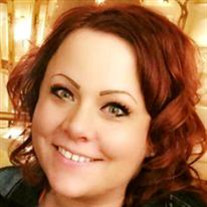 Tianna Lynn Davis June 17, 1982 - April 29, 2017 Tianna Lynn Davis (John) returned to Our Heavenly Father and her loving Dad on Saturday, April 29, 2017, at the age of 34 in Kansas City, MO. Tianna was born June 17, 1982, in Logan, UT, to David N. John and Brenda T. Wabel. Tianna was very outgoing and made friends very easily. She was extremely athletic; she picked up on sports effortlessly. Tianna also played softball for Logan High. She later graduated from Cache High School in 2000 where she met the father of her two oldest children Jensie and Jase. Her struggles in life led her to not be able to care for them, which left her heartbroken. Soon thereafter she lost her Dad, which led her to more sorrow and pain. During recovery she was blessed a little boy, Tatum, which helped heal a part of her broken heart. Also in her recovery, she met the love of her life, Taylor Davis, who brought three of his own children into her world: Warren, Livi and Layla, who she loved and adored as her own. Together Taylor and Tianna had a baby girl, Henley (Ginge), and were married May of 2015. Tianna was a fighter, and she fought until her last breath. In her last moments she felt peace and her Heavenly Father's love. So don't be sad for her, because she is free from all the hurt. The sadness that we should feel is how badly we're going to miss her. Tianna was preceded in death by her dad, David N. John, and her great-grandparents. She is survived by her husband, her children, her mother Brenda T. Wabel (William), her siblings, and her grandparents. We will see you soon our loving wife, mother, daughter, sister and friend. Funeral services have been changed and will be held at noon Saturday, May 6, at Nelson Funeral Home, 162 East 400 North, Logan, UT 84321. A viewing will be held from 5 to 7 p.m. Friday, May 5, at Nelson Funeral Home. Following the funeral, the graveside service will be held at Logan City Cemetery.

The family of Tianna Lynn Davis created this Life Tributes page to make it easy to share your memories.

Send flowers to the Davis family.