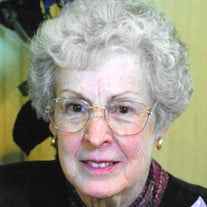 Estella Valene Crowther Turner, 89, of Logan, died Friday, January 15, 2016, in St. George, Utah of natural causes, two weeks before her 90th birthday. She was born January 30, 1926, in Malad, Oneida County, Idaho, a daughter of Edward Nehemiah and Estella Evans Crowther. She married R. Eyre Turner on June 18, 1952 in the Logan LDS Temple. She lived in Malad until graduating from Malad High School in 1945. She then enrolled at Utah State Agricultural College (USAC), now known as Utah State University and graduated from USU in 1949 with a degree in secretarial science. After graduating from USAC, she served a mission for the LDS Church in the Northern California Mission. Soon after her return, she and Eyre were married. During the early years of their marriage, Valene worked in the Extension Service office at USAC. As an active member of The Church of Jesus Christ of Latter-Day Saints, Valene served in a number of callings including stake Relief Society president, ward Young Women’s president and as an advisor for the Lamda Delta Sigma sorority at USU, however her favorite calling was as ward organist. She also served with Eyre as ordinance workers in the Logan LDS Temple and as full-time missionaries in the Canada Winnipeg Mission. Her greatest joy was being with her family and being a wife, mother, grandmother and great-grandmother and she excelled in all those roles. Valene was always there with a friendly smile, a kind word or maybe a plate of cookies and is beloved by all she has known. Survivors include three children and their spouses, Tracy and Cindy Turner, North Logan; Allyson and Lavell Christensen, St. George; Corey and Patrice Turner, Seoul, Korea; 11 grandchildren and 15 great-grandchildren. She was preceded in death by her husband, her parents and seven siblings. We would like to thank the staff members at Platinum Care Assisted Living Center and Sun Tree Hospice for their care and kindness during these last few months. Funeral services are at 11:00 on Tuesday, January 19 in the Logan 25th LDS Ward Chapel, 325 Lauralin Dr.; with Bishop Blaine Fluckiger conducting. Friends may call from 6-8 p.m. Monday at Nelson Funeral Home, 162 E. 400 N. and 9:30-10:30 a.m. Tuesday at the church. Burial will be in the Logan City Cemetery. Condolences may be sent to the family online at www.nelsonfuneralhome.com.

The family of Valene Crowther Turner created this Life Tributes page to make it easy to share your memories.