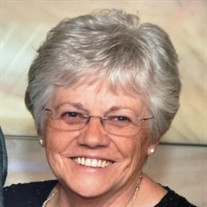 Veda Crossley Hillyard, our beloved wife, mom, grandma and great grandma, returned to her heavenly home on March 25, 2022, at the age of 84 in Logan, Utah. She must be having a great reunion on the other side with her parents, siblings; Mary (Gerald) Harsha, Perry (Sally) Crossley, Lois (Robert) Johnson, and Lowell S Crossley. And her beloved grandson, Jeremy Hillyard. Veda was born in Afton Wyoming on November 21, 1937. Veda spent her childhood falling in love with nature, laughing and serving those around her. She worked hard, but never forgot to have a good time while she was doing it, living religiously by the adage “a spoonful of sugar helps the medicine go down”. It was with that mentality that Max met and fell in love with Veda while working in the beat fields. Max proposed on Christmas Eve and Veda spent the rest of her life trying to convince him to love Christmas as much as she did. She passed that love of Christmas on to all of us. Veda and Max were blessed with four energetic and creative children, keeping up with those “whogadinks” was a full-time job, sometimes there were some real “kinkaboo’s”. Yet somehow, she found time to teach them to love camping, adventures, nature, service, the gospel and to always be kind. In 2004 Veda and Max completed a lifelong dream, they served a mission for the Church of Jesus Christ of Latter-Day Saints. They served with much love at Martin's Cove, Wyoming. As they served, the people of Martin's Cove Wyoming found out about the “magic” of Veda and asked her and Max to extend their mission. The short six-month mission turned into eighteen months. Veda had the “magic” with her grandchildren and great grandchildren as well. She somehow was able to convince every single one of her grandchildren and great grandchildren he or she was her favorite. She was, as her beloved Mary Poppins would say, “practically perfect in every way.” Veda leaves behind her sweetheart Max Jay Hillyard, her sister Ila (Noble) Erickson and her children; Michael Jay (Renae) Hillyard, Karl M (Denise) Hillyard, Sandra (Richard) Brough and Ned W (Trenna) Hillyard. Along with her many grandchildren and great grandchildren. We will miss her dearly but will remember her by the smell of campfires and banana bread. The vision of high-mountain bluebells and the feeling of unconditional love. Veda showed her love beyond her family, she spread it to her friends, neighbors, doctors, nurses and aids. She considered herself lucky, but they considered themselves luckier. Funeral services will be held at noon Thursday, March 31, 2022, at the LDS Chapel in Smithfield located at 640 North 200 East. Friends and family may call on the family at the church immediately prior to services from 10:30 to 11:30 a.m. Interment will follow the services and will take place at the Smithfield Cemetery. Condolences may be extended to the family online at www.nelsonfuneralhome.com.

Veda Crossley Hillyard, our beloved wife, mom, grandma and great grandma, returned to her heavenly home on March 25, 2022, at the age of 84 in Logan, Utah. She must be having a great reunion on the other side with her parents, siblings; Mary... View Obituary & Service Information

The family of Veda Crossley Hillyard created this Life Tributes page to make it easy to share your memories.