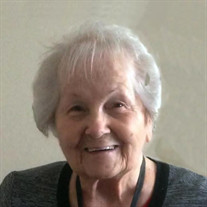 Verda "N" Hall Baugh (86) passed away Saturday, October 23, 2021, at Autumn Care Assisted Living in Hyde Park, Utah. She was born April 16, 1935, in Portage, Utah to Leona Grace Nish and Otto Eugene Hall. In 1942, their family moved to Logan and lived in the old 6th ward in Southwest Logan. She was married and divorced from Paul Jensen and Royal Baugh. After Verda and Royal divorced, Verda spent 20 years living with her sister Lynette. They took care of each other through the ups and downs of their early aging years. Together they kept a neat and tidy home, a beautiful yard, and cultivated and raised many varieties of flowers and a bountiful vegetable garden. They spent a lot of time each Summer, canning and preserving fruits and vegetables, and making delicious apple pies which they froze and shared with many family members, friends, and neighbors. Verda and Lynette had a passion for rescuing Scotty dogs, and had wonderful companions in Jock, Molly, and Scotty. They pampered those little dogs like crazy! We always joked that if reincarnation was a real thing, we wanted to come back as their dog!! Verda also loved good old Country music. Even as her Alzheimer's progressed, you would always see her toe tapping to the beat within a few seconds of turning on one of her favorite Country songs. Verda had a large and giving heart and through the years took many family members and friends into her home to care for and nurture. In October of 2013, Verda moved to Cache Valley where she was in the care of her niece, Charlotte Maughan. She also enjoyed a close association with her nieces Valerie Ringer, and Cynthia Thompson, and their extended families. Verda was a member of The Church of Jesus Christ of Latter Day Saints. On December 26, 2013 at the age of 78, she decided that she wanted to go to the temple, where she received her endowment for the first time. She had wanted to go to the temple for a long time and said it was the happiest day of her life. In April of 2017, Verda moved to Autumn Care Assisted Living and Memory Care where the Staff treated her like family. We want to thank all of the caregivers there, along with the Hospice Team from Symbii for their loving, compassionate care of Verda, and for the support they provided to our family. Verda is survived by 4 sons, Stanley (Lesley) Jensen, Alan (Donna) Jensen, Kelly (Michelle) Stoker, and David West, and a sister, Deanna Morse. She was preceded in death by her Mother and Father, sisters, Joyce (Ervin) Lehman and Lynette Hall. Services will be held Saturday, November 6th at Nelson Funeral Home, 162 East 400 North in Logan, Utah. Viewing at 10:30 a.m. with a short service at the mortuary at 11:30. Verda will be laid to rest in the Logan, Utah cemetery next to her sisters, Lynette and Joyce and her brother-in-law Erv.

The family of Verda Hall Baugh created this Life Tributes page to make it easy to share your memories.

Send flowers to the Baugh family.