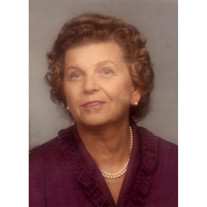 Tremonton, UT ? Virginia Nye Riley, 85, passed away November 22, 2010 at the Bear River Valley Care Center in Tremonton, UT. She was born December 2, 1924 in Seattle, WA to Earnest and Elizabeth Nye Sterling Spurgeon. She married William Nunn in 1946 and they later divorced. She married James Riley in October of 1966 and he passed away January 8, 2003. She lived and raised 5 sons and 1 daughter in San Diego, CA. She worked as a Home-maker most of her life and cared for her children and grandchildren. She was a member of St. Michael's Episcopal Church in Brigham City, UT. She was a member of the Good Sam's Club and enjoyed many camping trips with friends and family. She also enjoyed traveling and had traveled to many parts of the world. Her greatest joy was spending time with and caring for her family, especially going out to dinner and a movie and family vacations. She is survived by her children: Jack Castelli Sandy, Leavenworth, WA, Skip Nunn Gail Wausaukee, WI, Sandy Puckett Jay, Spring Lake, ID, Bob Nunn, Tremonton, UT, Rick Castelli Avril, San Diego, CA and Kenneth Castelli Denise, Tremonton, UT; She is also survived by a host of grandchildren and great grandchildren. She was preceded in death by her parents, husband, Sister Connie O'Brian and granddaughter Amber Castelli. At Virginia's request, private services will be held and Interment will be in the Fort Rosecrans National Cemetery in San Diego, CA.

The family of Virginia Nye Riley created this Life Tributes page to make it easy to share your memories.

Send flowers to the Riley family.