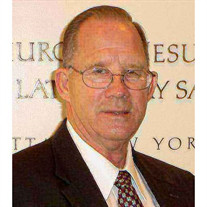 ?I?m three quarters of a century old and I can do about anything I want? were the most common words out of the mouth of dad over the past 9 months since he turned 75. Doing things in his own time and way, dad passed away quietly after suffering a stroke, surrounded by his family on the evening of August 10, 2009 at McKay Dee Hospital. Born October 26, 1933 in Salt Lake City, UT, to Walter C. and Mary Southern Johnson, he was the oldest of six children. Dad was raised in the Burley Idaho area, graduating from Burley High School in 1951. After high school he attended Utah State Agricultural College USU. In 1954, while at the AC, he met Eileen Campbell. They were married April 29, 1955 in the Idaho Falls Temple, just 2 weeks before he graduated. Mom and dad started their lives together in Rocks Springs, WY where they lived until dad was drafted into the armed forces. After basic training he was assigned to APO 169 in Giessen Germany where he was recognized as one of the top sharpshooters in the military. When he finally came home they lived in Tremonton for a few years, then in 1962 they settled in their current home in Garland. Dad learned young how to work ? and work hard. He started his first job in the potato fields of Idaho when he was only six and never stopped working from that day on. After his military service he joined the Thiokol Corporation as an engineer. He started on the Minuteman program and was a key person in the winning, development and production of the Space Shuttle. While at Thiokol he won many awards but his most treasured award was the Silver Snoopy which he wore proudly. Dad loved to hunt and fish and did, at the minimum, his fair share. He always carried a fishing pole in the car in case he would find a place to stop and ?rest?. Dad loved his canoes. He loved to be on the water paddling around, enjoying the calm of the water and stopping to see if he could ?catch that big one?. He taught us kids how to clean and take care of fish, ducks, pheasants and deer. He always knew the best spots to hunt and fish and would willingly take anyone who even so much as mentioned they were interested. Mom and dad worked side by side in everything they did, from canning fruit and vegetables to working in the temple. They worked in the Logan Temple from 1998 to 2007 when they were called on a Mission to the New York, Manhattan Temple. They loved New York. It was an amazing experience for them to live in the heart of that great city and serve the Lord. Dad and mom were lifelong faithful servants of the Lord. Dad served in many capacities including Young Men, Bishop, High Council and many other ward and stake callings for the Church of Jesus Christ of Latter ?day Saints. He was an example of service to the Lord and others throughout his life. At the time of his passing he was preparing his lesson for the High Priests Quorum this month. On September 30, 2008, his eternal companion and best friend passed away. The loss of our mother was difficult, but dad moved forward still serving others. On December 19th he decided to ?call his old friend Hazel and ask her to go for a bowl of soup?. Hazel created happiness and sunshine once again. Hazel and dad decided to be married on September 11, 2009. Dad?s passing will not allow that to happen, but Hazel, we can never thank you enough for the sparkle that returned to his eyes. Dad is survived by his fiancé, Hazel Leishman, his four children, Larry Kaylene, North Logan; Brent Terri Dodi, Garland; Colleen, Garland and Melanie Bill Bowen, Wellsville; grandchildren, Kevin, Jeff, Harmony, Ryan, Chris, Skylar, Brandon, Aspen, KaeLani, Riley & Marie; great grandchildren CJ, Jordan and Stormy. Also surviving are his brothers and sisters Earl Betty; Lynn Pat; Donna Jay Smith, Della Francisco Ortiz; Patricia Darrell Free. He was preceded in death by his parents and his eternal companion Eileen. Funeral services will be held Saturday, August 15, 2009 at 11:00 AM in the Garland Tabernacle with military honors accorded. Friends may call Friday, August 14 from 6-8 at the Rogers & Taylor Funeral Home, 111 North 100 East, Tremonton and 9:30-10:30 AM Saturday prior to the services at the Garland Tabernacle. Interment will be at the Garland Cemetery. In lieu of flowers please make donations to the LDS Church Perpetual Education Fund. We love you dad. ?See ya in the movies?!

?I?m three quarters of a century old and I can do about anything I want? were the most common words out of the mouth of dad over the past 9 months since he turned 75. Doing things in his own time and way, dad passed away quietly after suffering... View Obituary & Service Information

The family of Walter Benjamin Johnson created this Life Tributes page to make it easy to share your memories.

?I?m three quarters of a century old and I can do about anything...