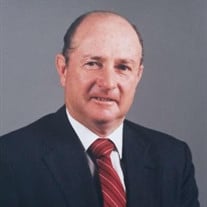 Wayne Roundy Cardon was born on August 22, 1927 the youngest of seven children of Hyrum and Isabelle Cardon. He was born at home and raised on a dairy farm in Benson. He rode his pony to school in snow, uphill both ways to a two-room schoolhouse about a mile from his home. He had an overachieving attitude and graduated with honors from North Cache High School at the age of 15. At 16 years of age he attended USU and played his trumpet in a big band for dances and events. He served a 2 1/2year mission for the Church of Jesus Christ of Latter-Day Saints in Uruguay and Paraguay. He served his country in the Korean conflict. On leave he met the love of his life, Sharlene Fullmer at a mission report of a mutual friend. They were married on December 14, 1951 in the Logan Temple. They made their home in Benson Utah, next to the home where he was born. Wayne returned to USU each winter quarter and received his bachelor’s degree in 1964 with a dual major in Spanish and Agronomy while running a dairy farm and raising a family of 8 children. He served in many positions in the church and served a Spanish speaking mission with Sharlene in Corpus Christi TX. Since Sharlene learned her Spanish lessons so well they were called to another Spanish speaking mission in Fresno CA, where she participated actively in lessons, nodding fluently. He passed away on August 21, 2020. He was 92 years and 364 days old. Wayne and Sharlene are the proud parents of 8 bright and wonderful children. John & Debbie Cardon (Price), Naomi (with God in Heaven) & Dave Stamm (Smithfield), Paul & Kate Cardon (Benson), Mary Theurer (Palmdale CA), Anna & Verl McCleve (Snowflake AZ), David Cardon (with God in Heaven), Sam & Vicki Cardon (North Logan), Matt & Lisa Cardon (Idaho Falls). They have 35 grandchildren and 48 great grandchildren. Viewing will be held at the Nelson Funeral Home 162 E. 4th N. Logan on Thursday evening August 27 from 6-8 p.m. and 11:30 a.m. to 12:30 p.m. on Aug. 28 at the Benson Ward Chapel. Funeral at 1 p.m. Benson Ward Chapel. Masks are encouraged. The funeral service will be streamed on ZOOM at the following link: https://us02web.zoom.us/j/88527897651?pwd=UWJwd2FoMm05REozaFUrNUk1bzJZQT09

Wayne Roundy Cardon was born on August 22, 1927 the youngest of seven children of Hyrum and Isabelle Cardon. He was born at home and raised on a dairy farm in Benson. He rode his pony to school in snow, uphill both ways to a two-room schoolhouse... View Obituary & Service Information

The family of Wayne Roundy Cardon created this Life Tributes page to make it easy to share your memories.

Send flowers to the Cardon family.