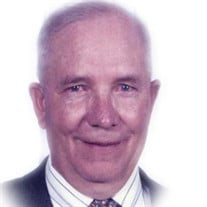 Wendle H Turner, 79, passed away peacefully at home surrounded by his family on December 22, 2014, his daughter’s birthday. Dad was born May 31, 1935 in Turnerville, Wyoming to Edumund Deloss and Agnes Elnora Turner. After being raised in Turnerville, he served an LDS mission to the Navajo people in the Southwest Indian Mission. He shared many talents while there, including his love of crocheting. Wendle earned a Bachelor degree in Dairy Production with a minor in Animal Husbandry at Utah State University in 1957, and served in the National Guard during the Berlin Crisis. He married Nancy Stone in the Idaho Falls LDS Temple on June 19, 1961; she passed away on November 20, 1975. He later married Sandy Chase on April 23, 1976 in the Logan LDS Temple. He is a loving father to twelve children. He worked hard all of his life and is best known as the "Candy Man" because he operated his own candy wholesale business for over 30 years. He enjoyed gardening and was known for his large garden which was used to feed his family during the winter. Fly fishing and tying flies were another favorite pastime. He also loved to go snowmobiling and passed that love on to many of his sons. He knew the mountains like the back of his hand. He served in many callings in the church throughout his life. This service included being a missionary in the Logan Distribution Center. He continued to serve in the Logan Temple until recently. He is our sweet, humble husband and father. His faith in the gospel of Jesus Christ and his example leave a beautiful legacy for his posterity. He is survived by his wife, Sandy, brothers: Garth and Bruce Turner, 12 children: David (Ranae) Turner, Rachel (Robert) McGee, Kari (Paul) Hoggan, Chris (Carrie) Kleven, Martha (Dusty) Hansen, Jon (Suzette) Kleven, Eric (Rachel) Kleven, Nolan (Sue) Turner, Katie (Brett) Jenson, Brian (Maralee) Turner, Lynn (Tricia) Turner, and Brady (Tina) Turner, 39 grandchildren and a great grandson. He was preceded in death by his wife, Nancy, brother, Lowell, and his parents. Funeral services will be held Saturday December 27, at 12:00 at the Smithfield Stake Center, 120 S. 600 East. A viewing will be held from 6:00 - 8:00 p.m. at the Nelson Funeral Home, 85 S. Main Street in Smithfield, on Friday December 26, and prior to the services on Saturday from 10:30-11:30 at the church. Interment will be in the Smithfield City Cemetery Condolences may be sent to the family at www.nelsonfuneralhome.com. The family would like to thank IHC Hospice, Access Home Care and Hospice, Right at Home, and all nurses and volunteers who offered him care.

Wendle H Turner, 79, passed away peacefully at home surrounded by his family on December 22, 2014, his daughter&#8217;s birthday. Dad was born May 31, 1935 in Turnerville, Wyoming to Edumund Deloss and Agnes Elnora Turner. After being raised... View Obituary & Service Information

The family of Wendle H Turner created this Life Tributes page to make it easy to share your memories.