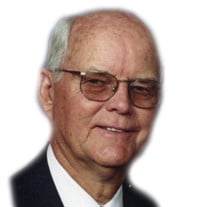 After a long and valiant battle with cancer, Wesley Maughan returned to his Heavenly Father on March 3, 2016. Wes was born at home on February 8, 1925 in Lava Hot Springs, Idaho as the sixth son and eighth child of John Raymond and Lera Clark Maughan. He was reared on a diversified farm where he learned the value of hard work and to love the land. He attended Lava Hot Springs High School, and after graduation he enlisted in the U.S. Navy Seabees. He served in both the European and Pacific theaters of war. At the close of WWII, he matriculated at Utah State University where he joined the ROTC and achieved the rank of Lieutenant. He graduated from USU in 1950 with a degree in Vocational Agriculture along with a secondary teaching certificate. On July 18, 1950, Wes married LuDean Gilbert in the Logan LDS Temple. Wes and LuDean began their life together in Merino, Colorado where Wes embarked on his life-long teaching career. Their first child, Steven, was born in Sterling, Colorado, and their first daughter, LuAnn, was born in Afton, Wyoming where the family had moved for Wes’s new teaching employment. In 1955 Wes joined the Utah State Extension Service and was stationed in Salt Lake City as an assistant county agent. Another daughter, Sandra, deceased, was born to them while in Salt Lake. The family then moved to Randolph where Wes served as the County Agent and was involved in rebuilding the Rich County fair and rodeo arena. Wes was a master welder and enjoyed forging. Among the things he enjoyed was teaching welding and working with the cattlemen. While in Randolph, their daughter Kayleen and son James were born. After four years in Randolph, Wes was awarded an NDEA (National Defense Education Act) Fellowship to the University of Wisconsin in Madison where the family spent their next three years supporting Wes as he earned his master’s degree in Sociology and a PhD in Community Development. They then made their home in Logan where their daughter Jana Lee was born. Wes spent the duration of his career on the staff at Utah State University teaching Sociology and Community Development and working throughout the state. He served assignments abroad in Upper Volta, Mali, India, and Nepal, after which he retired but continued with consulting assignments for many years. Serving in civic assignments was also important to Wes, including participating in the building of the Senior citizens building and serving as chairman of the American Red Cross. He enjoyed gardening and playing golf, and he was an avid Aggie and Jazz fan. He had a beautiful tenor voice and enjoyed singing in quartets and choral groups. He was an active member of the Church of Jesus Christ of Latter-day Saints. Wes is survived by his wife, LuDean, two sons and their spouses, Steven Larry and Leslie Jean Maughan of Nibley, James Raymond and Adair Maughan of Hyde Park, three daughters and their spouses, LuAnn and J. Burdette Stocking of North Logan, Kayleen and John C. Teed of Muscatine, Iowa, and Jana Lee and Robert M. Checketts of Plain City, Utah, twenty grandchildren and thirty great grandchildren, one sister, Alice (Frank) Neilson of West Jordan, one brother and spouse , Clyde and Norma Maughan of Schenectady, NY, and sisters in-law, Mary Maughan and Ina Liljenquist. He was proceeded in death by his infant daughter Sandra, his parents, two sisters, Lucille (Elmer) Johnson and Mildred (Owen) Bloomfield, and four brothers, Lyle (Ethel) Maughan, Ralph (LeJune) Maughan, Melvin (Catherine) Maughan, and Lowell Maughan. The family wishes to extend special thanks to a dear friend, Lonetta White, the hospice personnel from Community Nursing Services, especially Marcie Roberts, Mike Nelson and the staff at Legacy House for their professional and excellent care. In lieu of flowers make donations to Primary Childrens Hospital. A viewing will be held at Nelson Funeral Home (162 E 400 N in Logan) on Thursday, March 10 from 6-8 pm. Funeral services will be held on March 11, 2016 at Hillcrest 2nd Ward Chapel at 11 am with a viewing from 9:30-10:30. Condolences and memories may be shared online at www.nelsonfuneralhome.com

After a long and valiant battle with cancer, Wesley Maughan returned to his Heavenly Father on March 3, 2016. Wes was born at home on February 8, 1925 in Lava Hot Springs, Idaho as the sixth son and eighth child of John Raymond and... View Obituary & Service Information

The family of Wesley T Maughan created this Life Tributes page to make it easy to share your memories.

After a long and valiant battle with cancer, Wesley Maughan returned...

Send flowers to the Maughan family.