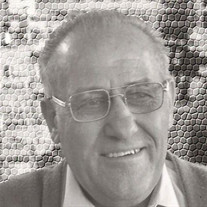 William Phillip Humphrey, known as Phil or Bill, passed away peacefully on Sunday May 20, 2018 at Logan Regional Hospital in Logan, UT. He was born December 7, 1926 in Wellsville, UT. He was the son of William Phillip Humphrey and Ruth Leatham. He was raised by his Mother Ruth, and Step Father Clarence P. Bird in Mendon, UT. Bill went to school in Mendon, Wellsville, and Hyrum. He joined the U.S. Navy and served in World War II. He was involved in the Invasion of Okinawa. He married his sweetheart, Lois Gyllensgkog in the Logan Temple on June 20, 1953. Together they have lived in Ogden, Salt Lake, and California. Upon retirement, they moved back to Mendon and then Logan, UT. Bill has been an active member of the Church of Jesus Christ of Latter-Day-Saints throughout his life. He has served as a Home Teacher, Stake Missionary, Supervisor, and most recently as a greeter. He had a strong testimony and loved going to church. He enjoys Serving and brightening your day. He loves to tell jokes, sing country songs, write poetry, and make you smile. Bill became a private pilot owning his own plane, an Amateur Radio Operator, massage therapist, earned the blue belt in Karate, and became a Private Investigator and Security Guard. He was preceded in death by his wife Lois, parents Clarence and Ruth Bird, a brother Lee Bird and a sister Mildred Bird. Survivors include his sisters, Dolores B. Geddes, and Ann B. Rasmussen, a Special friend Judy Talbot and many Nephews and Nieces. Funeral service will be at Nelson Funeral Home 162 E 400 N; Logan, UT on Friday May 25, 2018 at 11:00 AM. A viewing will be held from 9:30 AM-10:30 AM. Interment will be in the Smithfield Cemetery.

The family of William Phillip Humphrey created this Life Tributes page to make it easy to share your memories.

William Phillip Humphrey, known as Phil or Bill, passed away...

Send flowers to the Humphrey family.