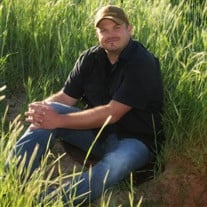 William James (BJ) Simmonds was called home to be with his loved ones in heaven on Friday, October 18, 2019. BJ was born August 1, 1977 in Logan, Utah, to Jerry Charles and Lana Bailey Simmonds, the middle of three boys. He graduated from Sky View High School in 1995 and went on to study biochemistry at Utah State University. On July 14, 2012 he married his best friend, Vicki Lyn Kunzler. They made their home in Providence, Utah, where they welcomed their two miracles, Kole Jerry (Bubba) and Ava Marie (Sweetie) - only 13 months apart. His children were the light of his life. He was an amazing dad and his children adored him. BJ loved his family. His brothers, Wesley and Erick, and his mother, Lana, were his best friends. Everyone loved being around him. He had such an infectious laugh and sparkling eyes, and his deep, smooth voice was instantly recognizable. BJ had such an old soul. He loved old movies and music and felt such a connection with the older generations. He loved the winter months the most and enjoyed skiing with his family and friends. BJ loved his job as the field trip dispatch coordinator for the Cache County School District, but his true passion was farming. He began farming at a young age alongside his father and later ran the family farm with his two brothers. His favorite place was on a tractor and he could often be found watching the pivot or the wheel lines. He leaves behind his wife, Vicki, and their two children: Kole and Ava. He is also survived by his mother, Lana Simmonds and his brothers, Wesley Simmonds (Lisa Lewis) and Erick (Katelynn) Simmonds, his mother-in-law, Sharon R. Kunzler, and many nieces and nephews. He was preceded in death by his father, Jerry Simmonds, and his father-in-law, Darrell C. Kunzler. Funeral services will be held on Friday, October 25th, 2019 at 11:00 a.m. at the Trenton LDS Church, 1200 North 400 West, Trenton, Utah. Friends and family may call Thursday from 6:00-8:00 p.m. at the Nelson Funeral Home, 162 East 400 North, Logan, Utah and again prior to the funeral from 9:30-10:30 a.m. at the Trenton church. Interment will be at the Trenton, Utah Cemetery. In lieu of flowers, memorial contributions may be sent to the BJ Simmonds Memorial Fund at America First Credit Union. Condolences and memories may be shared with the family on line at www.nelsonfuneralhome.com

William James (BJ) Simmonds was called home to be with his loved ones in heaven on Friday, October 18, 2019. BJ was born August 1, 1977 in Logan, Utah, to Jerry Charles and Lana Bailey Simmonds, the middle of three boys. He graduated from Sky... View Obituary & Service Information

The family of "BJ" William James Simmonds created this Life Tributes page to make it easy to share your memories.

William James (BJ) Simmonds was called home to be with his loved...

Send flowers to the Simmonds family.