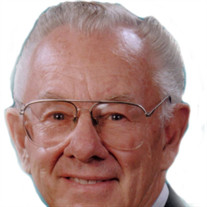 Our loving father, grandfather and great grandfather Willis Dee Crockett, 91, passed away peacefully on December 13, 2018 at the Legacy House in Logan, Utah. He was surrounded by his loving family. Dee was born June 4, 1927 in Smithfield Utah to William George and Mary Ann (Cole) Crockett. He had three brothers, Norman Ray, and Eldon (all deceased) and one sister Wilma (Farrell) Winters. His father was killed in a farm accident when Dee was 9 years old, so he learned very young to work hard and help the family. He went to North Cache High School and left school to join the Merchant Marines. Due to his age of 17 he had to obtain his mother’s consent. His Basic Training was at Catalina Island. He was overseas in the South Pacific serving from 1944 to 1947. During this time he had one of the thrills of his life when he went through the Panama Canal. He also got to see the Statue of Liberty. He loved sharing these memories. Dee met the love of his life at a dance in Mendon when they were in high school. A few years later they went to a New Year Eve dance in Smithfield. All the couples they were friends with were married at this time. They dared Dee and Renee to get married. So they left after the dance and drove to Elko Nevada in a horrible snow storm and were married on January 2, 1948. They were later sealed in the Logan Temple on May 31, 1957. They had their 3 children Carolyn, Randy and Cathy sealed to them. They had 70 wonderful years together. In 1948 he went to work at the Motor Pool at Utah State University and worked there for 36 years retiring in 1984. He also worked for Lyman Conoco Station while raising his family as a second job. After retiring, he continued to work and help his closest friend Boyd Campbell until he was in his late 80’s. Dee was a hard worker and a great example for his family. It was seldom that he was sitting around relaxing. He loved his neighbors and community. Often you could see him clearing the walks in the winter and helping to mow in the summer. His yard was beautiful, he took great pride in his home. You would never see a dandelion or leaf on his lawn. You could even see him picking up a leaf or two off the road. He loved the church. Dee held many callings throughout the years including working in the Temple in his later years. Renee and Dee liked to travel and went to the Rose bowl parade, Lake Tahoe, Reno and Las Vegas. They went to Hawaii for their 25th anniversary with their daughter Cathy. They loved camping and spent many weekends at Twin Lakes with several of their Smithfield neighbors and friends. They had a boat and the family spent many hours water skiing. He is survived by his children Carolyn Renee Lee, Randy (Suzanne) Crockett, Cathy (Neil) Anderson. He is also survived by his sister Wilma (Farrell) Winters. He has 12 grandchildren as well as 19 great grandchildren. He was proceeded in death by his wife Renee, mother, father, and his brothers Norman, Ray and Eldon. A viewing will be December 18, 2018 from 11:00 am to 12:30 pm at the Smithfield 11th ward at 79 East 200 South, Smithfield. Graveside service will follow at the Smithfield Cemetery at 1:00. Our thanks to Nelson Funeral Home for their help and assistance in this time of sorrow. We also wish to thank Legacy House, Williamsburg and Signature Hospice for the love and care shown to our Father. We love and will miss you dad and grandpa….

Our loving father, grandfather and great grandfather Willis Dee Crockett, 91, passed away peacefully on December 13, 2018 at the Legacy House in Logan, Utah. He was surrounded by his loving family. Dee was born June 4, 1927 in Smithfield Utah... View Obituary & Service Information

The family of Willis Dee Crockett created this Life Tributes page to make it easy to share your memories.

Send flowers to the Crockett family.