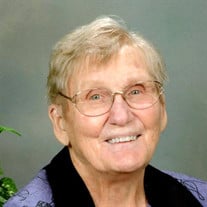 Yuvonne Nelson Sparks passed away May 16, 2017 in Preston, Idaho at the home of her daughter Patricia Checketts. She was born August 30, 1922 in College Ward, Utah and raised on a farm in Howell, Utah. She was the second oldest of nine children and the oldest daughter. Von eloped with Lewis W. Sparks on October 23, 1942 and together they had four children, one son and three daughters. The family was sealed in the Logan temple on April 24, 1964. Her life was full of hard work and included milking cows twice a day, every day for more than 40 years. Her husband often worked away from home so she ran the farm as well. She lived a life of service. Using skills from nursing school she adopted many elderly in Newton. She gave shots, did daily baths, sewed up cuts, treated burns, and met other various medical needs. She even delivered a baby and then drove the mother and baby to the hospital. For any death in Newton she tried to provide the first meal the same day as the death. It was the same menu every time: Barbeque, buns, potato salad, and cake. Von took in her mother when she was sick and then her father until he passed away and patiently filled their needs. She served as a temple worker for 17 years and loved her service there. She volunteered at the hospital gift shop for 18 years. She served the town of Newton as a secretary to the cemetery board for many, many years. Von was an example of hard work and industry. She and her kids farmed, picked beans, picked asparagus and moved four hundred thousand miles of sprinkler pipe. She taught her children to work by working side-by-side with them. Her legacy is one of service, sacrifice, hard work, and love. She didn’t expect life to be easy but always did the best with what she was given. Von was preceded in death by her husband Lewis Wesley and her son, Lewis Scott, her father and mother, Norman and Elizabeth Nelson, her two brothers, Delbert and Don, her sister Maurine and her son-in-law Rex Checketts Survivors include her daughters, Jeri Lyn Wright (Ron), Patricia Checketts (Rex, deceased), and Vonda Lue Sparks, her 13 grandchildren, 30 great-grandchildren, and 13 great-great-grandchildren; four sisters and one brother: Ardyth McBride (Darrell, deceased), Norma Jensen (Eldon), LaMar Nelson (Kathleen, deceased), Lola Beth Castleton (Don), Arva Rae Yost (Steve, deceased). Funeral services will be held Tuesday, May 23, 2017 at 11:00 a.m. in the Nelson Funeral Home Chapel, 162 East 400 North, Logan. Friends may call at Nelson Funeral Home on Monday evening from 6 to 8 p.m. and Tuesday from 9:30 to 10:30 a.m. Interment will be in the Newton Cemetery. Condolences may be sent to the family online at www.nelsonfuneralhome.com.

Yuvonne Nelson Sparks passed away May 16, 2017 in Preston, Idaho at the home of her daughter Patricia Checketts. She was born August 30, 1922 in College Ward, Utah and raised on a farm in Howell, Utah. She was the second oldest of nine children... View Obituary & Service Information

The family of Yuvonne Nelson Sparks created this Life Tributes page to make it easy to share your memories.

Send flowers to the Sparks family.